In cooperation with the Kosice self-governing region both, property owner and also investor, as well as Museum and Cultural centre as a manager and operator of the building, we managed to implement this unique exhibition.

The aim of the project is to preserve and develop hunting traditions, protect the environment as well as to make it available to the wide layman but as well expert public in order to raise the overall attractiveness of the South Zemplin Region not only for local but foreign visitors as well.

Taking into account the hunting history of the Andrassy family in this region as original owners of the premises, Kosice self-governing region gained the finances from European Structural Funds, Operational Programme called “Supporting cultural potential of regions and infrastructure of tourism” to reconstruct the premises of riding hall as a cultural monument under the administration of Museum and Cultural centre of the South Zemplin in Trebisov.

The parent firm of 'Lovecký ochranný spolok svetobežníkov'called, 'Világjáróvadászokklubja' (having its seat in Hungary) has already implemented a few successful projects with similar subject and using their experience, they helped to prepare dioramas and also lend rare exhibits.

The building is situated in the area of the museum in Trebišov. In the past, it served as a riding hall for horses. In the area of the riding hall were removed the results of insensitive construction impacts in order to bring back its original form and look. In the opened tower, there will be a town library offering fiction and scientific literature.

Nowadays, we present there biotopes of huntable animals from various parts of the world and also explain the importance and influence of the Andrássy family in Trebisov, mainly their liking for hunting, protection and care of animals.

The idea to establish a permanent exhibition proceeds from a historical message of the Hungarian Game Law No. XX/1883 which was a modern and at that time progressive and also the first in the world determined so called general hunting ban at the time of animals protection.

The priority task of this exhibition is to communicate with the public and educate the youth.

The Andrássy family residing in Trebišov came from the Betliar (Roznava) branch of this family. Their father was Karol III Andrassy (1792 – 1845), a prominent politician, statesman, and landowner who lived in the Manor House in Betliar. Their mother was Etela, née Szaparyova, who inherited large estates in Trebišov, Zemplin district in 1838, and then she divided her property among her three sons, namely, Julius (Gyula, who resided in Trebisov), Emanuel (Manó, who resided in the Manor House in Betliar and owned the inherited manor farm state in Parchovany, in Zemplin) and Aladar (residing in Humenne). 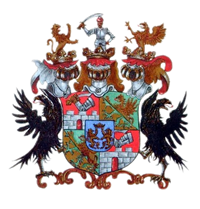 Count Julius (Gyula) Andrássy (1823 – 1890) studied law at the University in Budapest. During the revolutionary year of 1848, he was the zhupan (district administrator) of Zemplin, commander of the National Guard and a year later, an adjutant of commander Görgey as well as the ambassador of the revolutionary government in Istanbul. As a supporter of the government of Lajos Kossuth, during the revolutionary years of 1848 – 1849, he was forced to emigrate. In 1851, he was sentenced to death in absentia and symbolically executed. He came back in 1858 after having been granted amnesty and his great career was about to begin. After the Austro-Hungarian Compromise in 1867, he became the first Prime Minister of Hungary (1867 – 1871), and shortly also a minister without the chair (1871) and  served as Foreign Minister of Austria-Hungary (1871 – 1879). The Count had two sons and one daughter. The younger son, Julius (Gyula, 1860 – 1929) and older Theodor (Tivadara, 1857 – 1905). The younger one was Minister of the Interior and in the end of the Wold War I also Foreign Minister of the decaying monarchy whose capitulation he signed.

Hunting and game preserve were an essential part of the Andrássy ̓s life. The Zemplin Zhupa was one of the richest in a number of animals in Hungary and the Andrássys devoted significant attention to keeping animals. In the animal parks in Trebisov and Velaty they bred the fallow deer, in Parchovany they bred the deer, fallow deer, and moufflon deer.

The Andrássys who resided in Trebisov (Gyula, senior and later his sons Tivadar and Gyula the younger), in Parchovany (Manó and his son Géza) and in Velaty (Aladár and his son Sándor) annually held great fox hunting with the beginning on 3 November ( St. Hubert) which was visited by prominent Hungarian aristocracy. Keeping purebred hunting dogs essentially belonged to the hunting. Géza Andrássy owned and kept in Parchovany a famous pack of foxhounds which was the largest in the area of  Upper Hungary and existed until the year of 1914.